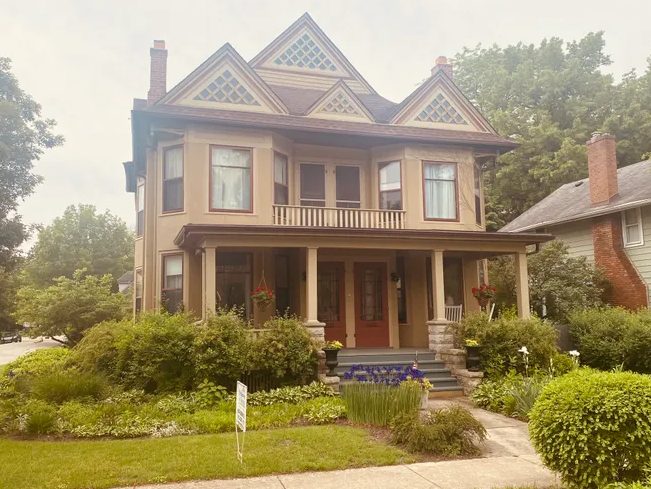 Signs of a cool down for Rockford's hot housing market? What April sales data tells us

June 6, 2022- Rising mortgage rates and a lingering shortage of inventory are contributing to a slow down in the region’s sizzling housing market, according to Rockford Area Realtors.

Single-family home sales in Winnebago, Boone and Ogle counties declined 1.5% in April compared to the same month in 2021.

June 16, 2022 -  Rockford Area Association of Realtors will merge with two other real estate groups to create a new joint association in an effort to expand its reach and customer benefits.

The new association is named NorthWest Illinois Alliance of Realtors and will represent Realtors with nearly 6,700 annual homes sales.

“These mergers have come through a vision for a much larger and stronger organization that can provide more for our members, more for homebuyers and more for homesellers,” said Conor Brown, who will serve as the CEO of the new group. 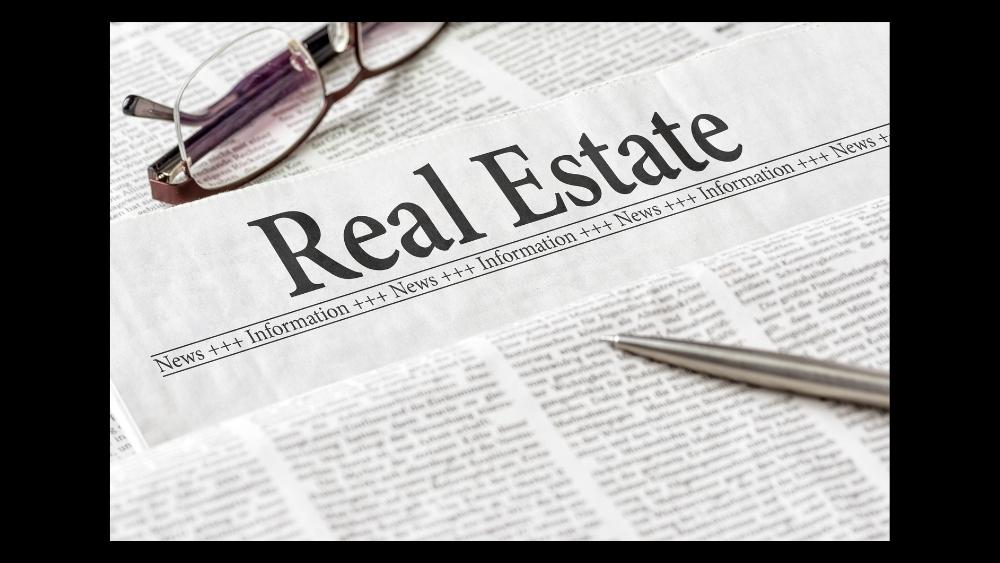 June 30, 2022 - The average home sale price in the region has hit a new high for the year even as mortgage rates climb.

The average three-month price was up nearly 6% in May, according to NorthWest Illinois Alliance of Realtors, making it advantageous to sell homes.

“This is a great time to sell your home,” said Conor Brown, CEO of NorthWest Illinois Alliance of Realtors. “The average home spends just two and a half weeks on the market, with a good number of properties still drawing multiple offers from prospective buyers.” 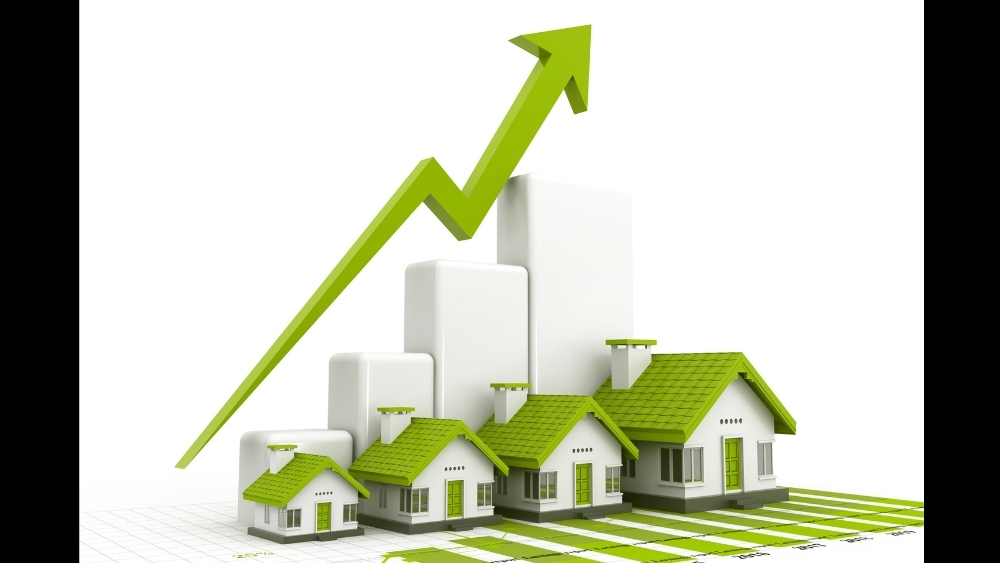 July 27, 2022 - Home sale prices in the region have returned to their record-setting ways as buyers scramble to snatch up properties before mortgage rates rise further.

The three-month rolling average sale price for a home in Winnebago, Boone and Ogle counties was $187,072 in June, according to the NorthWest Illinois Alliance of Realtors. That tops the previous all-time high of $179,355 set in October. When the record was set nine months ago it was the third-straight month of new record high prices and the sixth time in 10 months a new record was set.

But the record-setting pace cooled as mortgage rates started climbing. The latest average rate of 5.52% in June is up from 2.98% a year ago, and more increases are expected.

“Homes are still showing strong price gains and they’re selling rapidly, even though the housing market is starting to feel the impact of rising mortgage rates taking a hit on purchasing power,” said Conor Brown, CEO of NorthWest Illinois Alliance of Realtors.

July 27, 2022- The Rockford-area housing market hit record numbers for the month of June.

Realtors said that it is a seller’s market right now, and that the June price went up 6.2% from last year. The highest price point on record is $187 thousand.

“So this is my first home purchase, and I did not realize all of the idiosyncrasies that come along with trying to find a house, and all of the necessary due diligence you need as far as getting pre-approval,” said new home owner Matt Becker. 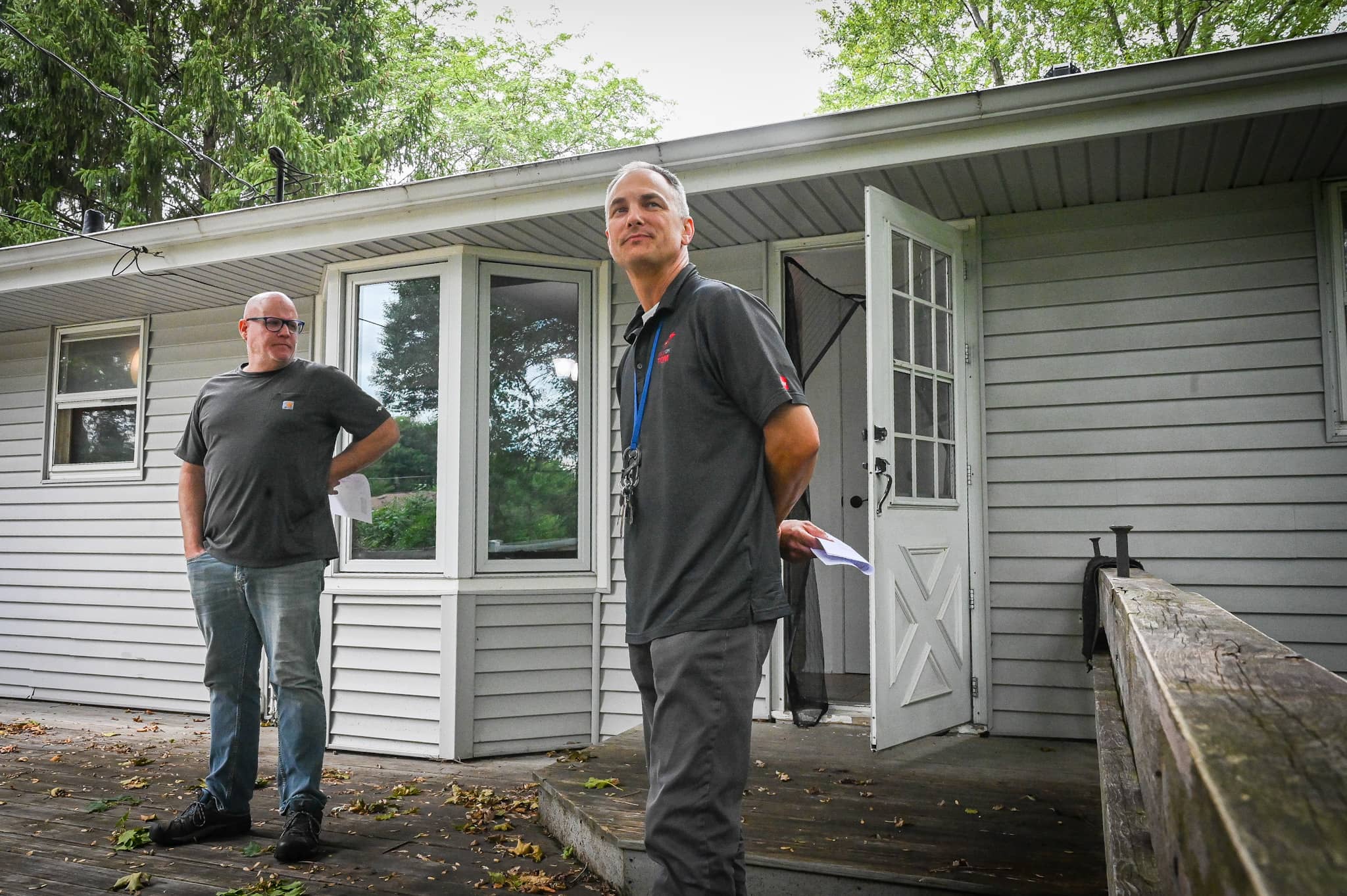 August 30, 2022- Kent Holliston spent three years saving for a down payment on his family’s future home.

But by the time he stepped back into the market he had been priced out of the Roscoe area where he preferred to live with his wife and 9-year-old daughter.

Holliston’s story is illustrative of what many buyers are facing here as home sale prices hit a new record high for the second straight month. The average sale price of a home sold in the region last month is up nearly 11% from the same time a year ago, meaning buyers would have to cough up an additional $19,000.

“We’d like to be in a certain area, but the way the prices are there’s no way,” Holliston told the Rock River Current on Friday at a showing for a home in south Rockford. “Eighteen months ago, 24 months ago, yeah, we could’ve lived in those areas. Today, in this market, we can’t afford it.”

Prices haven’t dipped much from their record highs, with the September average ranking the third highest in history, but the number of homes sold was at its lowest in September in five years.

There was a nearly 16% drop in home sales from September last year to this year, according to NorthWest Illinois Alliance of Realtors data. There were 450 homes sold in September, the sixth straight month of decline.

The drop in sales comes as mortgage rates have risen nearly 4 percentage points in 10 months to their highest level in 20 years.

“The ongoing sales decline reflects the impact of mortgage rates at 6.11% at the end of September and now hovering around 7%,” said Conor Brown, CEO of NorthWest Illinois Alliance of Realtors. “In an inflationary economy, prices rise across the board.”

November 29, 2022- The City of Rockford provides the Rockford Local Development Corporation with a 0% loan to rehabilitate houses in local neighborhoods.

After approval from City Council, Rockford will provide a 0% interest loan to the Rockford Local Development Corporation. The goal is to invite more investors to rehabilitate homes in local neighborhoods.

The Loan Pool is managed by the Rockford Community Investment Fund who will provide financing to rehabilitate or flip homes.

Local realtors, Bobby Walsh and Michelle Huber, said this $1 million loan program creates the opportunity for a lot of good to happen in residential areas. 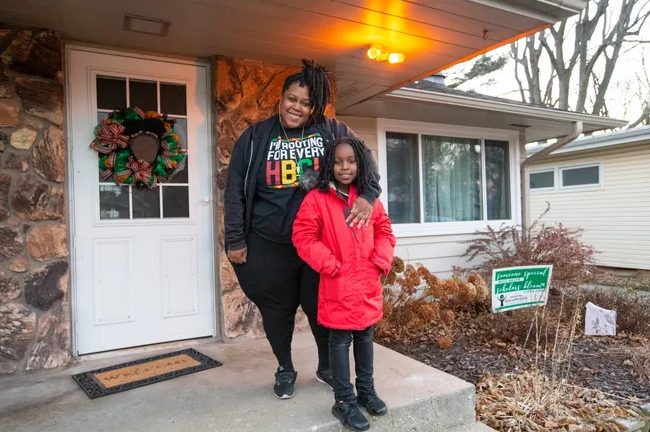 December 5, 2022 - Tatiana Elliott has achieved her dream of becoming a homeowner.

The 38-year-old math and science teacher at Galapagos Charter School has purchased a two-bedroom and two bath ranch house in northwest Rockford.

Elliott and her seven-year-old daughter, Alani, relocated from an apartment on North Avenue into their new home in July.

“The rising cost of renting just made it more reasonable to start looking into owning a piece of property and letting the money that I was spending on rent go toward something that is going to be mine,” she said.

Data from the Census Bureau’s 2021 American Community Survey analyzed by the Urban Institute shows that Latino homeownership rates increased by 2.5% while the rate for the Black community rose by 2% over the two-year period.

REALTORS® in the News 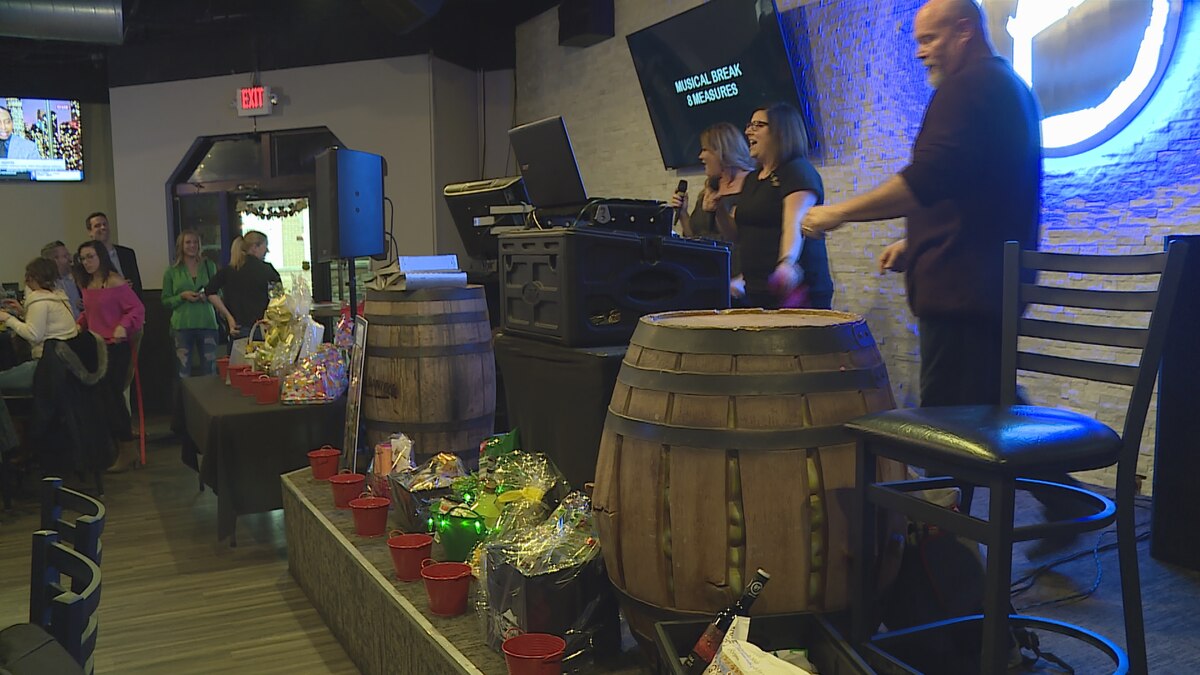 March 11, 2020 - 23 News Anchor Shannon Kelly had the chance to get behind the bar along with Mayor Tom Mcnamara for the Rockford area realtors Young Professionals Network celebrity bartending event. The main attraction was dare-aoke. 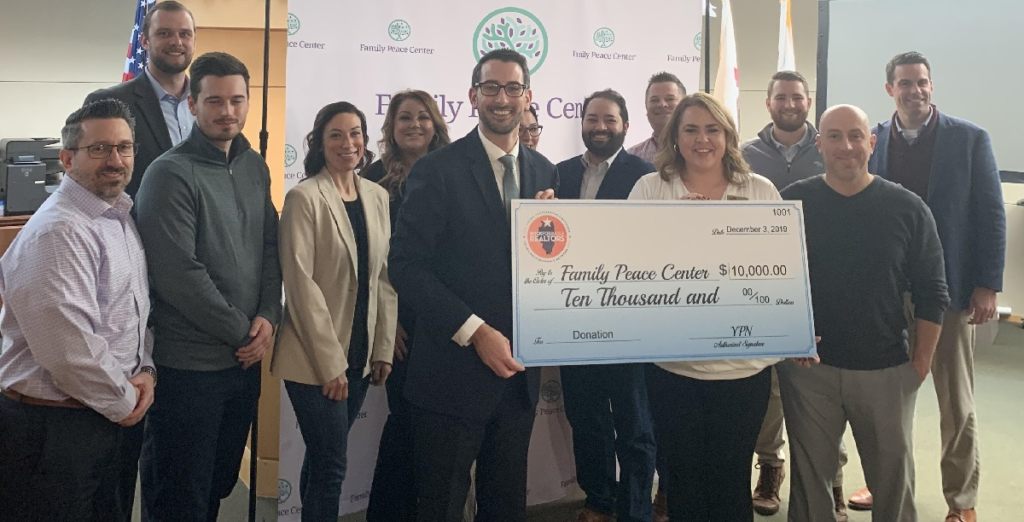 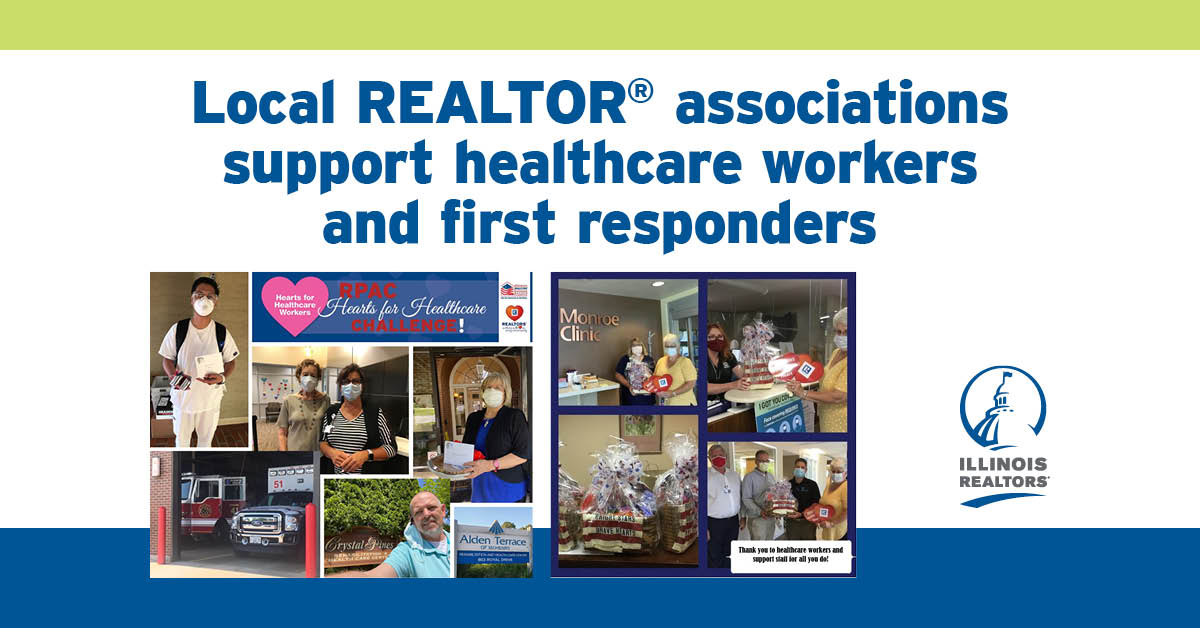 August 14, 2020- Members of the Heartland REALTOR® Organization (HRO) of greater McHenry County, the REALTOR® Association of Northwestern Illinois (RANWIL) and the Rockford Area REALTORS® showed their community spirit in memorable ways during the COVID-19 pandemic.

As inspiration for their actions, the local associations drew from the RPAC Hearts for Healthcare Workers Challenge. 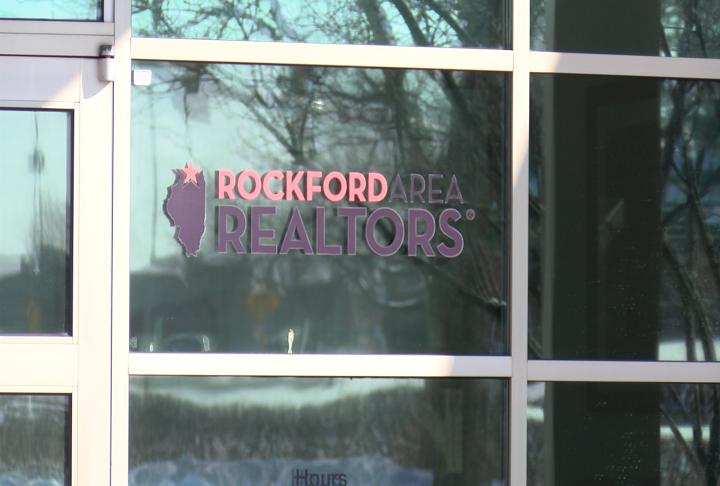 November 19, 2020- A group of Stateline realtors teamed up with the Northern Illinois Food Bank to ensure the community doesn't go hungry.

Rockford Area Realtors usually hosts an annual holiday event where people donate funds and the groups donate the money to a local non-profit. This year, because of the pandemic, it wasn't able to host the event. 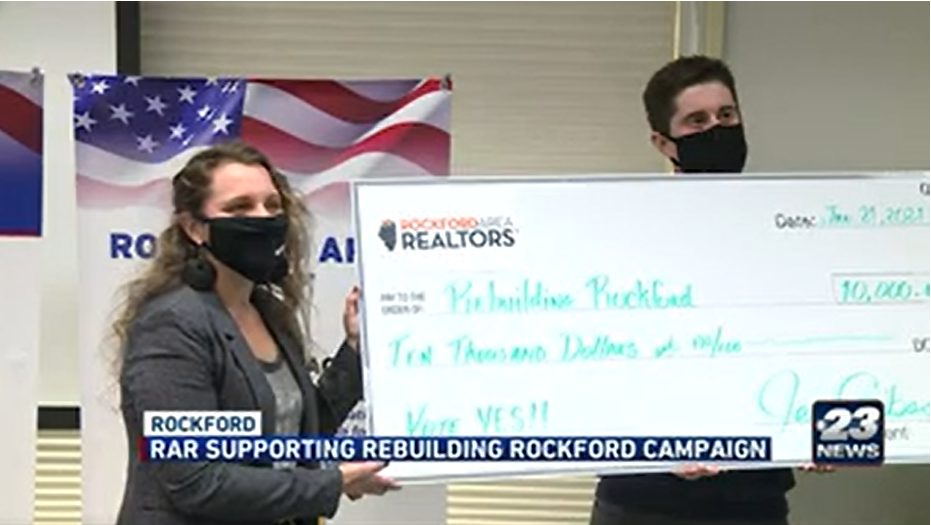 January 21, 2021 - The Rockford Area Realtors presented a $10,000 check to the community-led Rebuilding Rockford Campaign to express support for the extension of a city of Rockford public roads and infrastructure referendum that will appear on the Consolidated Election ballot on Tuesday, February 23, 2021.

Rockford Area Realtors supports the community-led campaign with $10,000 to continue its efforts to educate voters on the extension of the 1 percent public roads and infrastructure sales tax. 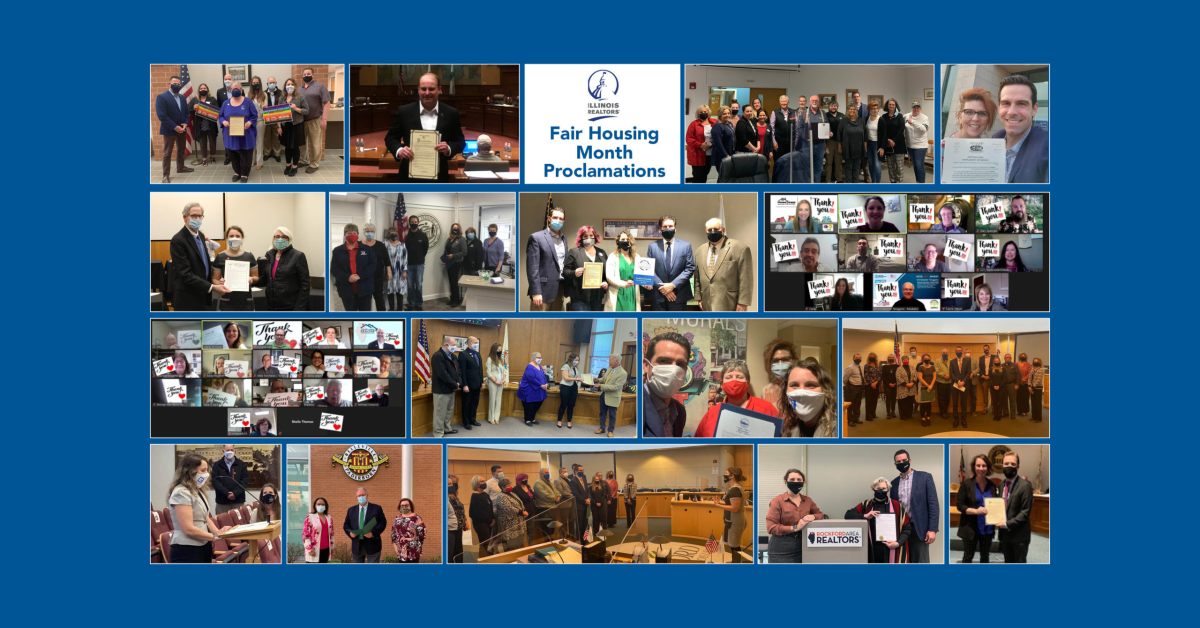 Each year, April is recognized by Congress as Fair Housing Month in the United States to commemorate the passage of the Fair Housing Act in 1968. This year, the Illinois REALTORS® encouraged the passage of fair housing proclamations by local government bodies across the state. 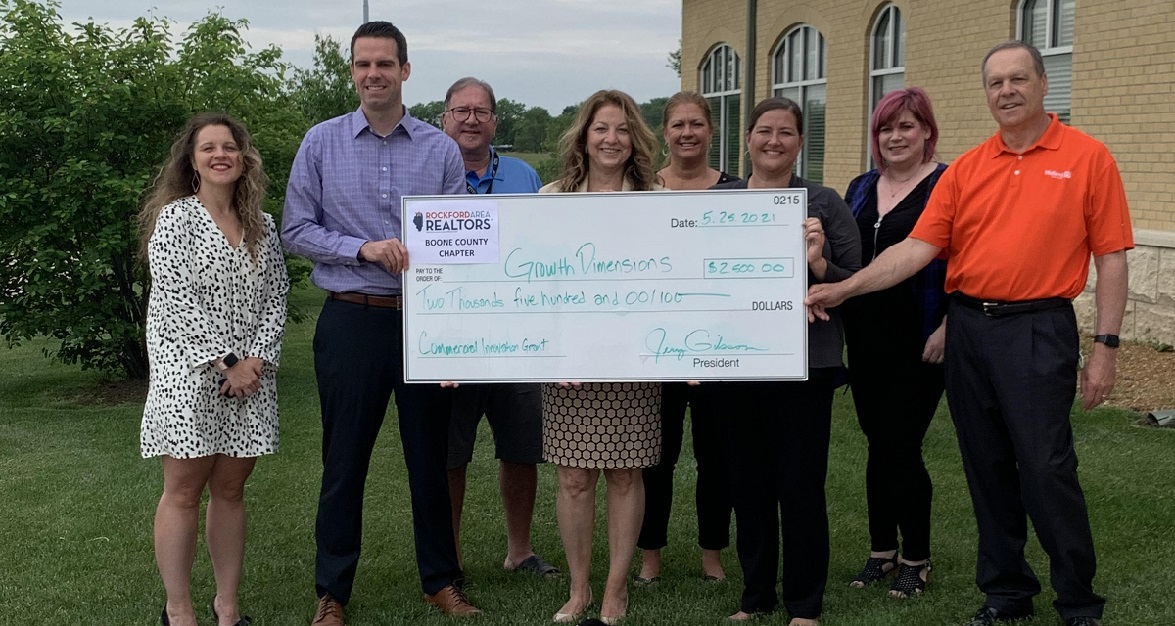 The grant money is one of several contributions local REALTORS® have made to help bring commercial and residential development to the area, according to Illinois REALTORS® Local Governmental Affairs Director Neeley Erickson. Boone County members have built strong relationships with Growth Dimensions, and Boone County REALTORS® President Christi Steines is a member of the Growth Dimensions Board of Directors. 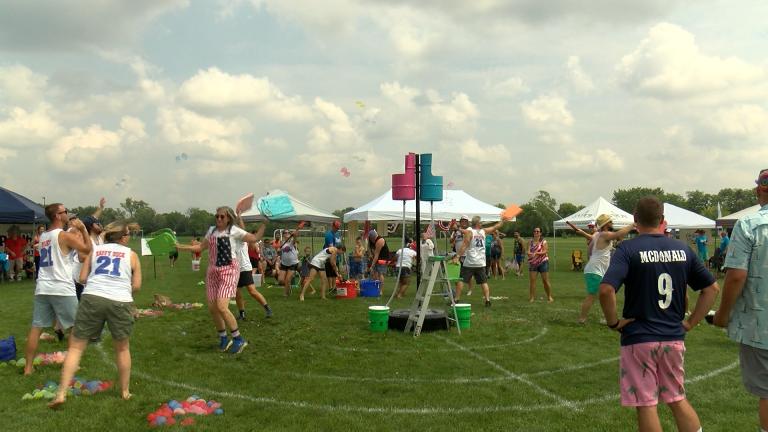 July 22, 2021- An epic battle took place in Rockford on Thursday...an epic water battle, that is.

It was held by Rockford Area Realtors at Sportscore One. Teams could sign up and compete against each other by trying to throw as many water balloons as possible into buckets in three minutes. The event aimed to raise money for Miss Carly's. The group provides food, shelter and supplies for homeless people in Rockford as well as helps people struggling with poverty and drug addiction. 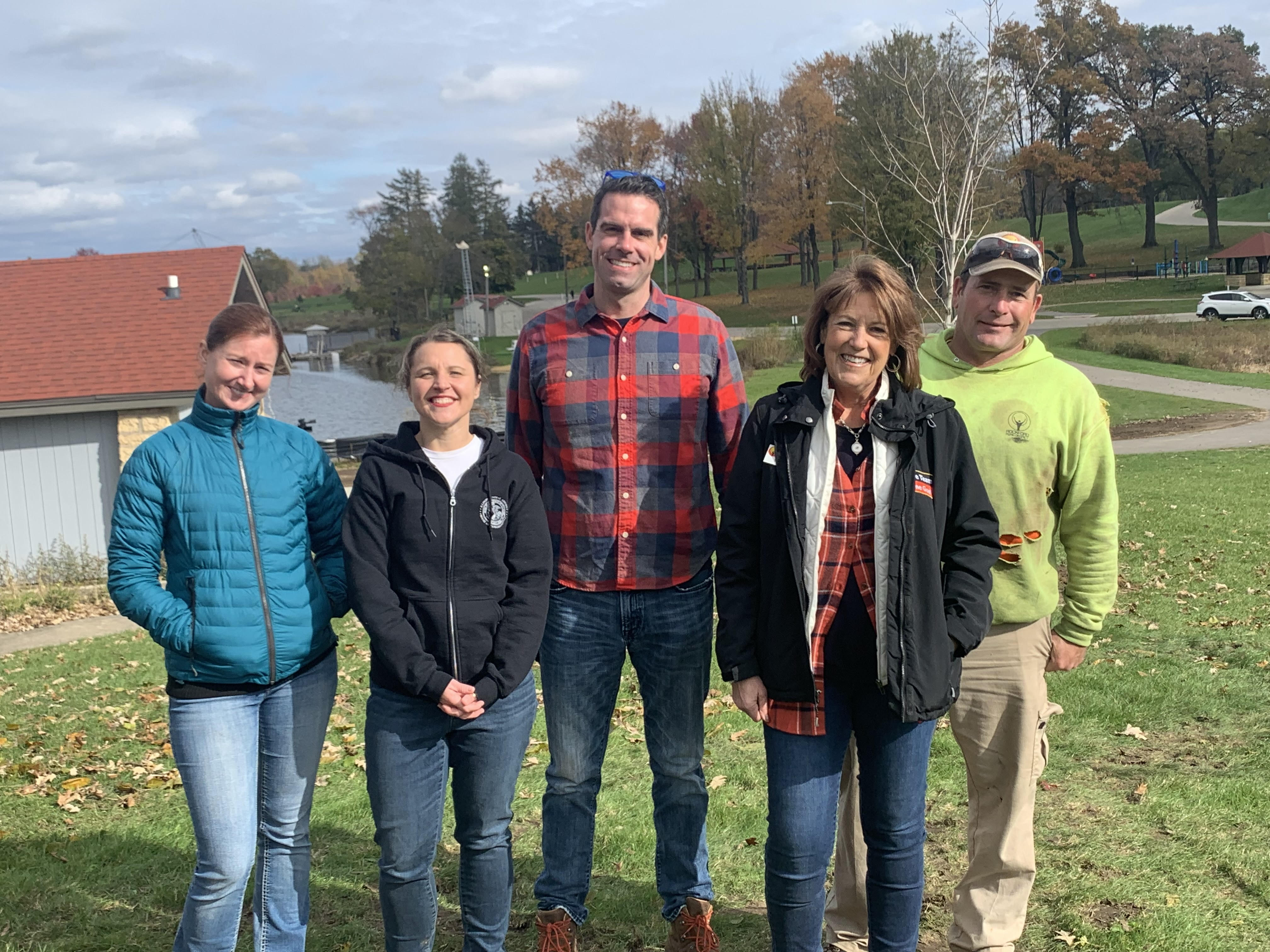 ‘For Everyone To Enjoy’: New Deck Overlooks Levings Lake In Rockford

November 3, 2021 - A new deck overlooking the banks of Levings Lake will give park-goers a place to relax, picnic or watch the action at West Rock Wake Park.

Members of the Rockford Area Association of Realtors put some of the finishing touches on the project Wednesday by planting a pair of trees near the park’s entrance at 1420 Pierpont Ave.

The Realtors provided a $5,000 grant to help cover the cost of building the composite wood deck, which replaces picnic benches that rested in a sandy bank of the lake that had once served as a beach. 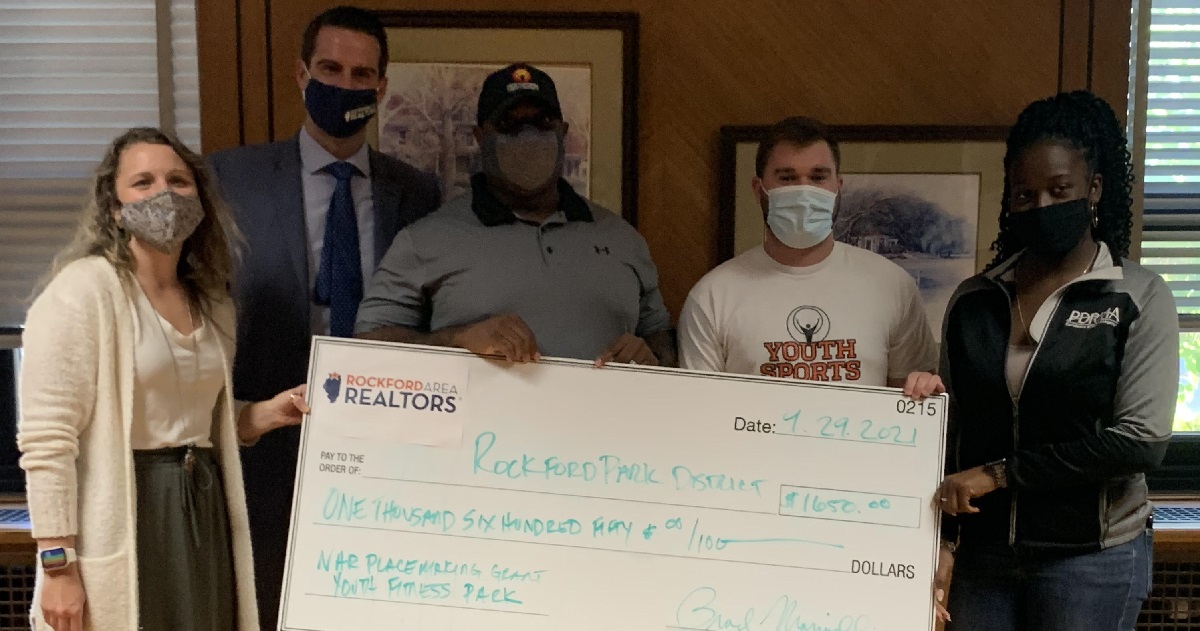 November 5, 2021- After raising funds to help the Rockford Park District with a portable fitness project for local youths, the Rockford Area REALTORS® (RAR) are using their influence to help the park district develop one park and improve another one.

First, RAR applied for and secured a $1,500 National Association of REALTORS® (NAR) Placemaking Level 1 Grant and added $150 of its own funds to support a Youth Fitness Pop-Up Park.

Over the course of nine days, park district volunteers used an empty lot next to Clarence Hicks Memorial Sports Park on the city’s southwest side to test the idea. Using signage to identify the activities and educate participants, volunteers led boys and girls in track and field activities and helped them safely use power fitness ropes, plyometric boxes and other exercise equipment.